If music be the food of love, play on... Here you will find the following Tiger of the Stripe books: Anecdotes of George Frederick Handel and John Christopher Smith by William Coxe, Victor Schoelcher's Life of Handel, Purcell by William H. Cummings. 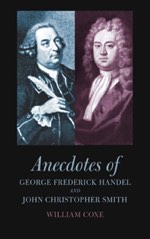 The Reverend William Coxe was the stepson of Handel’s amanuensis, John Christopher Smith. As such, he had unique access to information on Smith’s life and, to a lesser extent, Handel’s.

This book, reset from the original edition of 1799, corrected and annotated, consists of separate memoirs of the two composers. 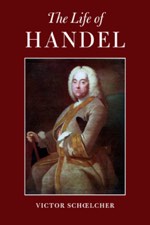 The Life of Handel

Gossipy and anecdotal, yet scholarly and impeccably researched, Schoelcher’s vivid biography of Handel must rank as one of the finest portraits of a musician ever written. This new edition has been completely revised and is profusely illustrated.

We see in the contemporary newspaper reports, memoirs and letters, a man of great contrasts. While he could dash off the most sublime music at remarkable speed, he would bestow countless hours on revising the minutest details. He combined a fiery temper with great loyalty and generosity.

Few composers have been so fêted in their lifetimes, and yet Handel was also vilified and conspired against. Despite great success and royal patronage, he spent his years in London struggling to make a living. His determination, resilience and talent are remarkable and affecting.

Victor Schoelcher (1804-1893) was born into a wealthy Parisian family of porcelain merchants. He was a politician, journalist, art critic and musicologist, but is mostly remembered for his role in the abolition of slavery in the French colonies. He also campaigned for women’s rights and for the abolition of the death penalty. 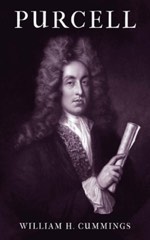 William Cummings's highly regarded biography of Henry Purcell has been revised and reset to mark the 250th anniversary of the birth of Henry Purcell, one of the greatest English composers of all time. Few other composers can boast the originality or the range which Purcell displayed – from sacred music, to airs, to tavern songs and the first great English opera, Dido and Aeneas. As well as following Purcell's life and career, the book provides appendices on Purcell's family, the organists, choirmasters and copyists of Westminster Abbey, and a list of important dates in the composer's life.

William H. Cummings was Principal of the Guildhall School of Music, London, and a noted music historian.